For Christmas I bought myself a Garmin Forerunner 645, after becoming irritated to the point of distraction by my Polar Flow M430. Now that I've used the Garmin for a few weeks, this is my compare-and-contrast review of the two devices. 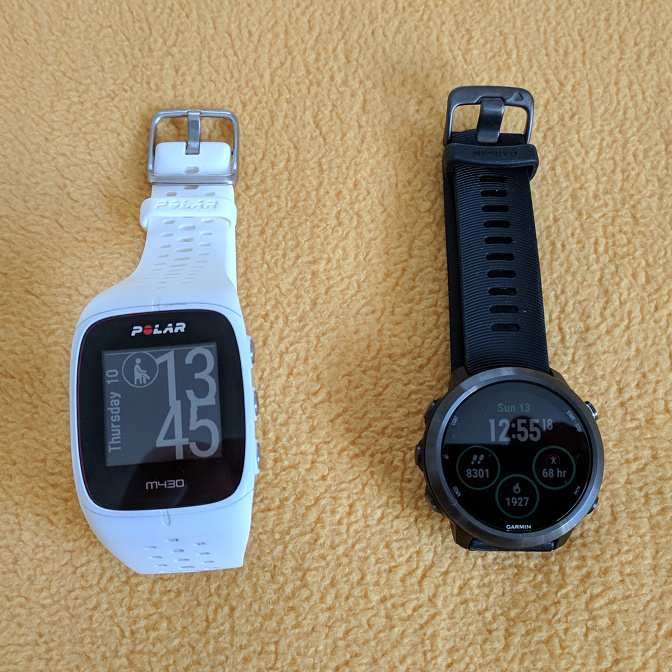 These are the reasons I got annoyed with the M430:

Lest I paint an entirely negative picture, I should make clear that it's not all bad. On the occasions when the GPS and the heart-rate monitor function correctly, the watch is fine and does its job. But it's not a joy to use and I wanted a change, so enter the Garmin.

I actually bought the Forerunner 645 Music, which lets me stream music directly to bluetooth-connected headphones without needing to take my phone out running. As that's not a feature on the Polar Flow, I'm not going to consider it for comparison here. But it works well and has enough storage to comfortably fit 25 90-ish-minute techno mixes, which is my motivational accompaniment of choice when running.

The Garmin is both lighter and slimmer than the Polar Flow, but the first thing you really notice about it is that the screen is much better. It's in colour, is easier to read and has a selction of widgets to scroll through that show in-depth, varied information about your day or week. These include the usual suspects like step counter, calorie counter and heart monitor, but also local weather, a compass, training status and the ability to install 3rd-party widgets from the Connect IQ Store. Immediately the Forerunner becomes a more useful thing to wear on your wrist all of the time, whereas with the M430 I tended not to wear it for general use and just put it on when going out for a run.

The mobile app is also much better on the Garmin, with bucketloads of features and, best of all, syncing is an activity that takes place automatically in the background rather than being an explicit step to be invoked by button-press. There's also a separate app for MacOS/Windows, if you prefer to control your watch from your computer.

A couple of times I've worn both watches together on a run, to see how they compare. The Garmin definitely feels lighter on my wrist and always connects to GPS faster. The two watches mostly agree on all the major statistics, except for the aforementioned flakiness when measuring heart-rate on the Polar Flow.

I definitely prefer the Garmin Forerunner 645 to the Polar Flow M430 and recommend it if you happen to be weighing up a decision between the two watches. I haven't noticed any rough edges in the Garmin user interface like I did with the Polar Flow, and it is better than the Polar Flow in all the areas where I found that device annoying.